If you have a Silhouette machine and haven’t quite figured out how to trace objects or shapes you find on the internet then this tutorial is for you.   This will go through the steps of taking an image and tracing it to be able to cut it out in your Silhouette studio program. 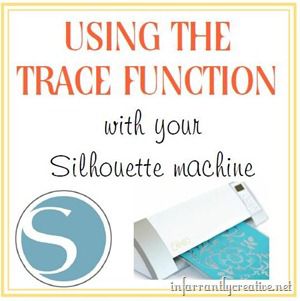 I wanted to make a pennant banner using the varsity type letters that looked stretched mimicking the Pottery Barn Kids one that is sold for $52. 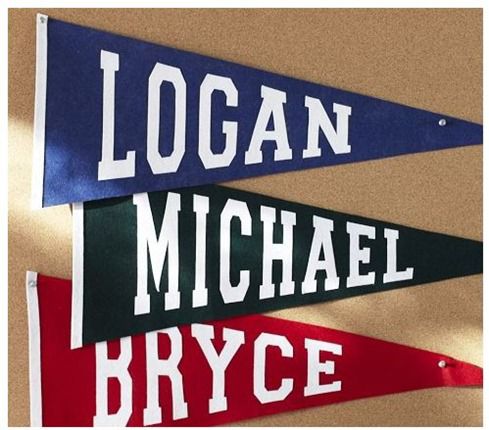 1. I ended up downloading the Varsity Regular font from dafont.com and designing the actual stretched lettering in Open Office Writer but Microsoft Word has the same stretch type feature in their Word Art function.

2.   I changed the paper size in Open Office Writer to 12” x 30” and then used the Fontworks (a.k.a “Word Art” function in Microsoft Word) feature to spell out “Austin” and make it stretched to look like a pennant.

3. Click once on the font to change the shape to the pennant shape. 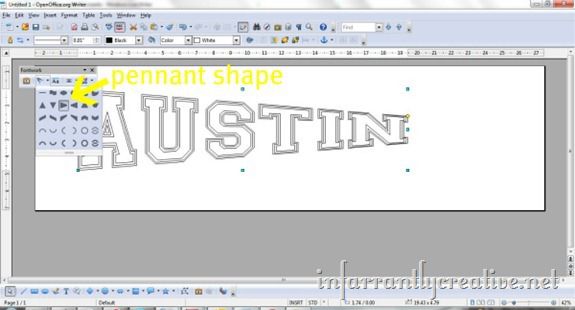 4.   Next I used my snipping tool and snipped the entire word and pasted it into my Silhouette Studio program. 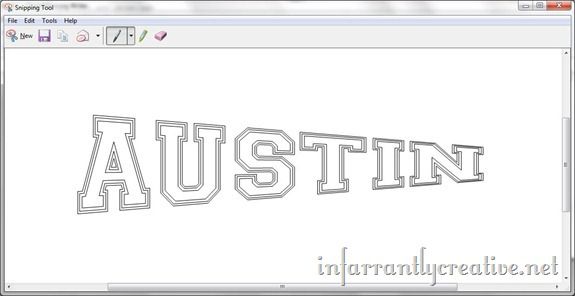 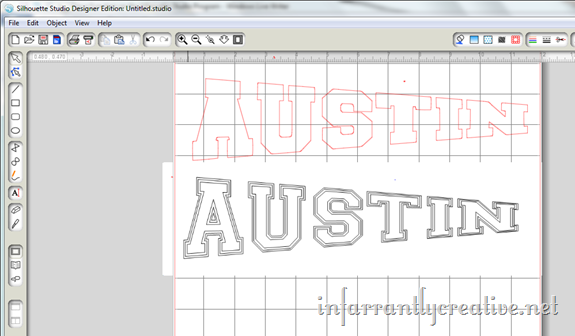 6.   As you can see everything was traced but the inside of the “A”.   Now I could go back in and trace the middle part of the A but it was just as easy to use the “line” function to trace the little triangle and then move it to my cut out Austin and group them together.

7. I deleted my copied Austin so I just had the red cut out. Next I changed my paper size to a 12” x 30” and drew two lines in the shape of the pennant so I could get the gist of the spacing on my felt banner.   Then I adjusted the font larger to space it on my pennant. 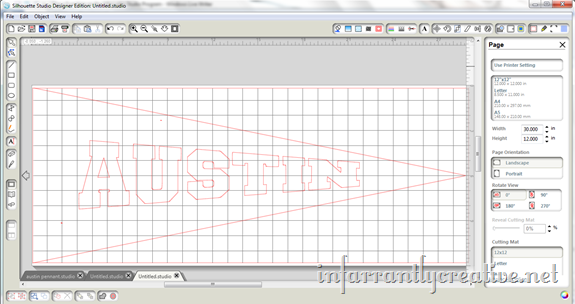 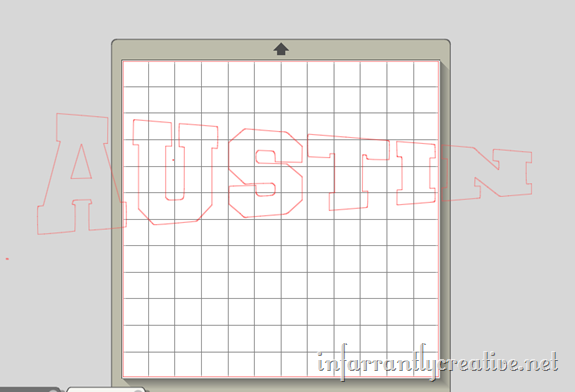 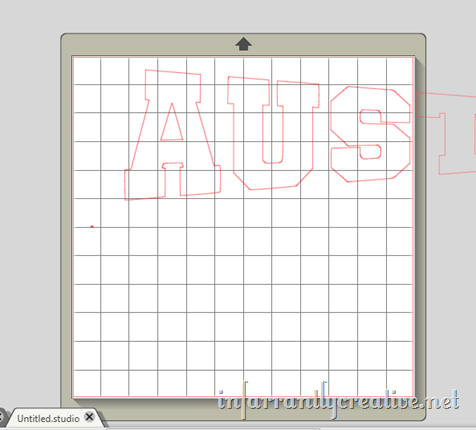 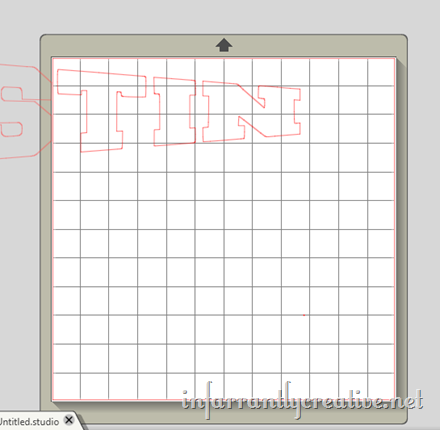 And there you have your cut out letters to then trace onto felt to make the personalized pennant.   I will show you the actual tutorial for the pennant tomorrow. 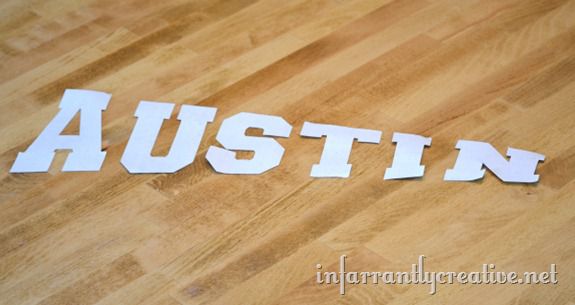 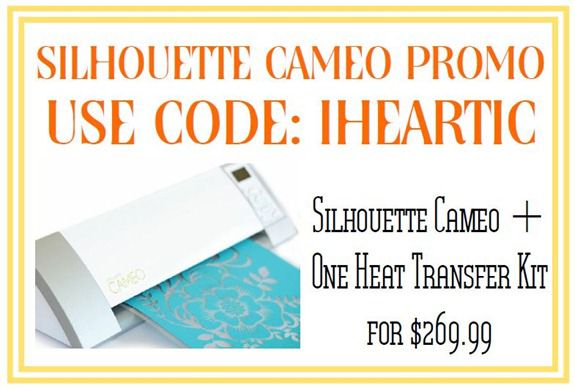 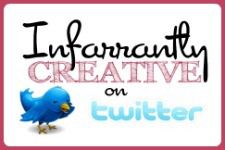 Thanks so much for this awesome tutorial Beckie. There are so many things my Silhouette can do that I just haven’t learned yet, can’t wait to try this out!

Thanks so much for the tutorial! I just received a Silhouette Cameo for my birthday and have been trying to figure out how to use the darn thing! Very overwhelming at times!

Thanks for the tutorial. I’m a new Cameo owner so need all the help I can get!

I need to use my Silhouette more. So many things I could be doing!

Great tutorial. I can’t wait to go and try it on my Silhouette machine.

Looks great. Thanks for the tips on the letters. I have one suggestion for you. You can actually right click on the letters and ungroup them. This way you can move around each letter individually and be able to fit it on one 12×12.

Thank you for a great tutorial!! I have a new Cameo and am trying to figure out how it all works! I followed your instructions, using Microsoft Word, but I can’t figure out how to get the word art that I created onto my Silhouette page. Copy and paste doesn’t work. What am I doing wrong? I really appreciate your help and the time you take to show us how to create amazing things!

Do you have a snipping tool? That should work too.

Thanks so much for this tutorial. I!’m confusing myself trying to cut this using two different colors. Any suggestions would be greatly appreciated. I never start with the easy stuff

Hi Karen, I would love to help. Can you tell me more about your project? Are you trying to cut a name? How are you using the two colors?

Thanx for the info, this was awesome never even knew that was part of word even tho i’ve seen it a hundred times!

This is Fantastic! Thank you for breaking it down! My Silhouette has been sitting on my table unused for almost a year because I couldn’t get started! Sinful I know!

Oh man, you gotta break that baby out! I LOVE LOVE LOVE my Silhouette.

Oh my gosh, what a great tip about using that “word art” function to make your word shaped like a pennant. I never thought of that! I have access to Illustrator so do a lot of my more complex designing in there and would have tried it that way. But sometimes, the fancy programs take a little more time then just popping open Word and doing it there. Thank you so much for this post! I suddenly have a bunch of new ideas…uh oh 😀